Copper price followed a V-shaped trajectory from 2011 to 2020. Starting in 2011, the copper price trended downward because of the excessive production capacity of copper concentrates, driven by the combined effect of worldwide economic slowdown, European debt crisis, and China’s austerity policies. It then began to rebound after the U.S. dollar hit its annual low and Donald Trump was elected the President of the United States in 2016, a momentum further supported by the declining inventory and economic recovery in 2017. However, in 2018 the China-U.S. trade war, macroeconomic downturn, and consumption stagnation sent copper price into a sideways drift. And at the beginning of 2020, when the world economy was paralyzed by the outbreak of COVID-19, the price plummeted to its lowest point in the past seven years. Later, as major economies rolled out loose monetary policies and China’s economy resumed recovery and production ahead of other economies, the copper price rebounded and kept moving up. 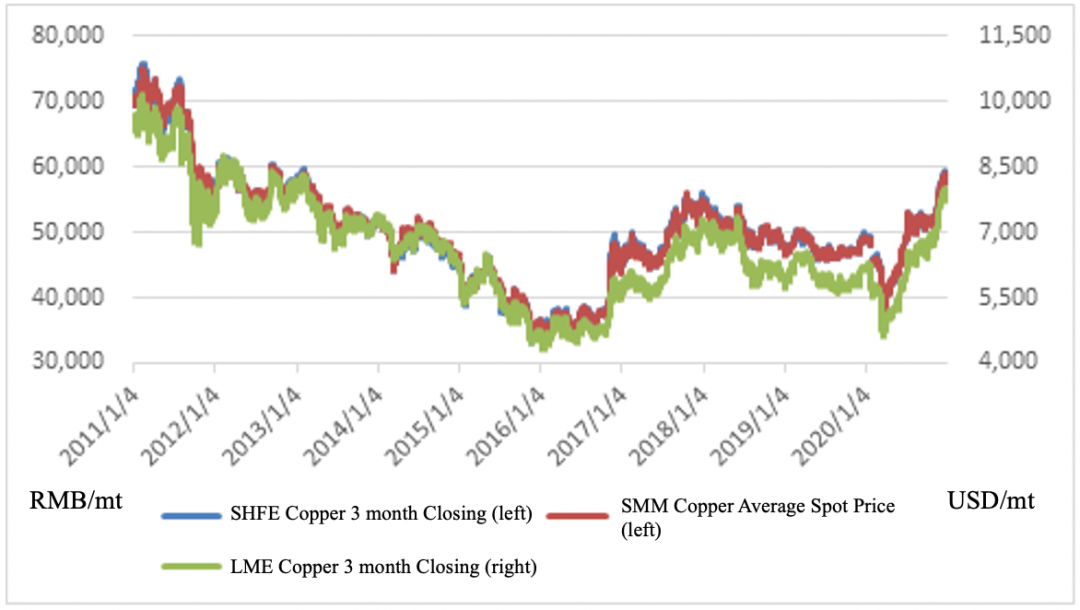 Copper is one of the most important commodities today. Its production and consumption is closely related with the macroeconomy, and therefore its price often acts as a “barometer” accordingly, a function that has given the metal the moniker of “Doctor Copper.”

There are three major factors that influence the copper price. First, fundamentals of supply and demand. In the medium- and long-term, copper price is negatively correlated with the supply of copper concentrates and changes in treatment and refining charges (TC/RC), and positively correlated with changes in consumption level. Other factors that affect supply and demand are seasonal changes in the operating rate of copper downstream industries, changes caused by policies on recycled copper as well as the  domestic and overseas inventories.

Second, macroeconomic factors. Generally, the fact that the copper price will be affected by the macroeconomy to some extent shows certain financial attributes, and is negatively correlated with the U.S. dollar index in most cases. Domestically, changes in interest rates, social financing and M1/M2 are always regarded as observing indicators for financial operation and currency liquidity, and the corresponding changes in demand as well as the periodic expectations for inflation will also affect the copper price fluctuation.

Third, unforeseen events. The outbreak of COVID-19 at the beginning of 2020 is one such example: the copper price dived in response to the stalled global economy. In addition, earthquakes or accidents at copper mines or strikes at a mine or a smelter would reduce the expected supply, and therefore drive up the price.