More than a newspaper.

A worker observes the condition of the cantilever after removing the bracing system yesterday at the construction site of Shanghai Planetarium.

Construction on the Shanghai Planetarium reached a milestone yesterday as temporary braces were removed on a 2,000-ton cantilever structure, the museum said.

The 38,000-square-meter planetarium, a new branch of the Shanghai Science and Technology Museum, is in the Lingang area of the Pudong New Area. It consists of three sections, or “celestial bodies” — the Oculus, the Inverted Dome, and the Sphere. The cantilever structure is part of the Sphere.

Steelwork on the Oculus and the Inverted Dome were finished earlier and the cantilever is the last piece of the museum’s steel structure. The cantilever structure was temporarily supported by 12 metal frames while another eight had already been removed. The structure can now stand on its own, without external support.

“Construction work on the planetarium is a trilogy,” said Gu Qingsheng, deputy curator of the Shanghai Science and Technology Museum. “The first step is civil construction and the second is the steel structure. With the removal of the temporary braces on the cantilever, the steelwork is mostly complete. Next we will make the last step, on the curtain walls.” 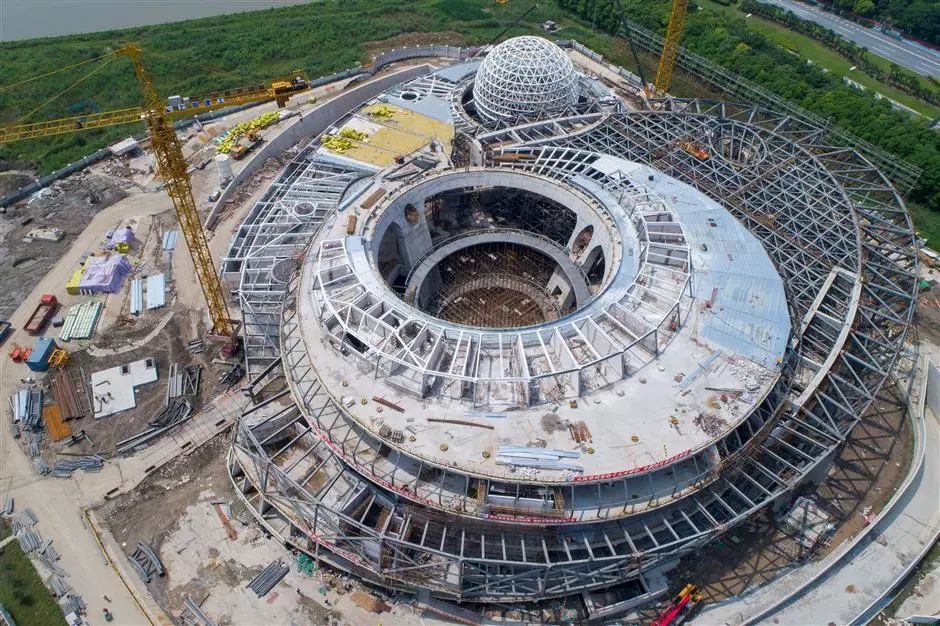 A bird's-eye view of the new planetarium

By early June, nearly 85 percent of civil construction had been completed. Gu said after the curtain walls are installed, they will start decorating for exhibitions.

Alexander Brandt, founder and creative director of Xenario, a company working on the planetarium’s exhibitions, was at the construction site yesterday to observe the recent progress.

“Me and my team are the exhibition design company for this project and we came here because we have to always be aware of architectural developments in order to better adjust our exhibition design in the space,” said Brandt. “This is the third time we have come here in order to understand the space, the constrains and the technical possibilities as well as the difficulties we will face when we install the exhibitions.”

The main body of the planetarium will have three themed sections — “home,” “universe” and “journey” — where visitors can explore the universe and its fundamental principles. There will also be buildings for telescopes and youth activities.

Once completed, the planetarium will be one of the largest in the world.