The Draft Foreign Investment Law and Its Impact on VIEs

The best way to understand the draft Foreign Investment Law (“Draft”), circulated by the Ministry of Commerce of the PRC (“MofCom”) on Jan. 19, 2015, is to read it in the context. Fortunately for Jun He, we were invited by MofCom to participate in the drafting working group since the beginning, and more than a dozen of our partners and associates had been involved in drafting and commenting before the draft became public a few days ago. Here is how we look at this Draft.

It is clear the PRC government wants to shift the focus of the regulation of foreign direct investment (“FDI”, in the forms of equity joint ventures, contractual joint ventures, wholly foreign owned enterprise, and etc.) away from the case by case approval system. The current foreign investment legal framework is largely structured by the corporate form of foreign investment enterprises (“FIEs”), focusing more on corporate governance. The governance structure differs among different forms of FIEs, and is mostly not coherent with the general structure laid down by the Company Law that is supposed to govern all companies in China. The MofCom and its local counterparts spend mountains of resources to review and approve each investment, and the super-majority of these reviews is just a matter of formality wasting roughly one monthtime. On the other hand, things like national security of ten casually slip from the mind of the reviewer because, among otherthings, it is not the focal point of the local government that is designed to attract, not to resist, foreign investment of any form. The existing FIE laws seem quite lagged behind. However, the biggest legacy of the PRC government is that there is competing interest among different government agencies, and without masterful communication and alignment of interest, any grand plan could easily result in a mere wishful thinking.

So, the Draft is a much calculated effort of MofCom to test whether its new master plan to regulate FIEs would beem braced by interested people. These people include different regulators, at both national and provincial levels, and domestic and international businesses. You can imagine there are a lot of lobbying forces.

The skyline under the Draft includes the following important parts:

a) The gist of the new incorporation system is, unless the underlying business falls within the Negative List (defined below), FIEs would not have to be approved to be incorporated (Art. 26).

b) There is a negative list to be provided by the State Council (“Negative List”), the executive center of Chinese national government(Art. 22). That is, the Negative List would have to consider all interest of different ministries, different localities and China’s treaty duties before it is launched.

c) The Negative List concerns size of the FDI or the intended investment industries. If an FDI warrants a review by MofCom, the review would be focused on national security (Arts. 48-74 are designated exclusively to codify the current national security review system), regulated industries, benefits to the general public or innovation, monopoly concern, treaty duties, background of the investors, etc. (Art. 32). There is a time limit for review (usually 30days). Public hearing may be convened and appeals are available if review results in rejection or conditional approval (Arts. 35, 39 & 40).

d) The Draft sets up a new information reporting system that requires foreign investors and FIEs to report, e.g., their investment in stock markets, and change of investment profiles (Arts.75-99). Such reporting system will, in most cases, replace the current approval system to become the source of information for the regulators to monitor from a macroscopic perspective the overall status of foreign investment in various industries in China.

e) The Draft assigns chapters to legislate promotions and protections of foreign investments, inspections of and complaints by foreign investors and FIEs (Chapters 6, 7, 8 & 9). All these systems are novice to the whole FIE regulations, and it looks they are designed to create a more predicable investment environment.

While the Draft is new, some of the conceptions have been existing for some time, and started to take shape in practice. For example, the national security review is already regularly practiced. The Negative List has been adopted in China (Shanghai) Pilot Free Trade Zone (“FTZ”) for a while. However, the change of the definition of foreign investment has raised the eyebrows of many.

In its Article 18(3), the Draft expands the definition of FDI to include contractual control by foreign investors. If implemented, many companies, including hundreds of listed companies that use the so-called “variable interest entity”structures (“VIEs”) might have to go through structural changes.

At present, there are more than 200 companies listed in the US stock market using VIE structures. With the Draft, people may wonder whether these companies would have to undertake structural changes. For such listed companies that are actually “controlled” by Chinese investors (defined in Art.12), perhaps the change of the law would not be an issue because under the Draft these FIEs in form would not be considered as owned by foreigners insubstance. For those actually “controlled” by foreign investors (defined in Art. 11), they may have to seek licenses for their VIEs from the government, and the government might not grant them. Would that mean all these companies have to be delisted or the foreign investors have to transfer their control to the Chinese investors? We don’t know the answer, but remain optimistic. Chinese government has always been taking a very pragmatic approach when dealing with matters that may have a significant impact on the business world. As the stake of VIE-related business is huge, the likelihood of a sudden turnaround seems to be slim. Indeed, in 2006, when China introduced the M&A Rules that regulated foreign investors’ acquisition of Chinese domestic businesses, they grandfathered the prior transactions. In MofCom’s explanation remarks accompanying the Draft, they made it clear that MofCom would not rush into any decision simply to close down all the non-compliant VIEs if the Draft is actually promulgated as a law (Section 3).

We anticipate, based on our experience involved in many legislation exercises, that it would take a while for the Draft to be enacted and officially promulgated by the National People's Congress, the ultimate legislatorin China. When it is launched, the Foreign Investment Law would probably be in a different shape, due to the wrestling of different powers in the legislative process. The Draft is therefore better understood as the start of a public discussion, not the conclusion of it.

Articles published on Jun He Legal Updates only represent the opinions of the authors and should not in any way be considered as formal legal opinions or advice issued by Jun He or its lawyers. You are welcome to contact us for any further discussion or exchange of views on the relevant topic. 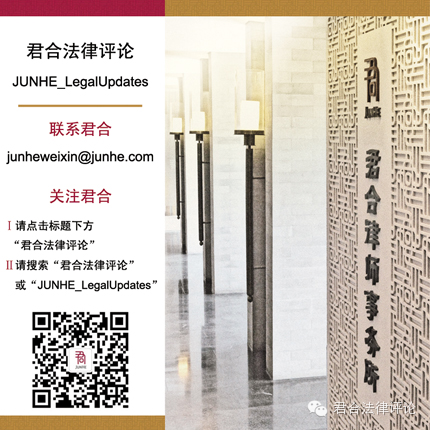